No one knows who the first to "Skin" something was. But we do know that in 1995, Stardock, a young up and coming software developer released Object Desktop for OS/2. In development for 2 years, Object Desktop was truly a remarkable technological achievement. And it would go on to be the best selling OS/2-specific shrink wrapped package of all time. What Object Desktop did is allow people to enhance the OS/2 desktop to how they wanted it. In OS/2's case, it was usually used to tame the wild OS/2 desktop (called the workplace shell). IBM's view with OS/2 was to make it supremely flexible.

For this part of the history, it is important to remember the key year Object Desktop was developed: 1994. It was the time of Windows 3.1 and DOS. ZIP programs consisted of either very crude GUI programs or PKZIP on DOS. File management was the Windows File Manager or Norton Commander. Virtual desktops on DOS/Windows (or OS/2) were largely unknown. The more you remember the state of the PC in 1994 the more remarkable Object Desktop becomes.

And hundreds of enhancements to the OS that were so seamless that many users would come to believe they were part of the OS.

Object Desktop became the most popular non-IBM product on OS/2. Machines that came with OS/2 already installed typically came with Object Desktop with it. And Stardock had more ideas on where computer operating systems could go. IBM asked Stardock's Brad Wardell to come to Austin to discuss what the OS/2 Warp 4 desktop should be. The result is that IBM's OS/2 Warp 4's desktop was simplified and a close button added (in the position Object Desktop placed it).

As with much of this history, the timing of these innovations is crucial. Today, the idea of having the web as part of the desktop seems straight forward. Windows 98 introduced Active Desktop. But Object Desktop Professional was developed in 1995.

In Object Desktop 2.0, Stardock combined its original folder design with Microsoft's Explorer design to create a new type of folder window. It also introduced Dynamic Interface Modules (DIMs) which was Stardock's dorky name for "Skins" back then.

In 1997, Stardock began working on Object Desktop for Windows. But on Windows, Stardock faced two challenges. The first one is the age old question, "What is to stop Microsoft or some other huge company from just taking your ideas and putting them into their OS or bundling them with some massively popular program?" The second was the issue of the decline of the OS/2 market. The OS/2 market's decline was very rapid in 1997 and most of the well known OS/2 ISVs disappeared between 1997 to 1998 (or went to Windows). Stardock's challenge was how to pay for the development of Object Desktop?

In December of 1999, Stardock officially released the Object Desktop Network. That is, subscriptions would start to count. The ability to skin scrollbars was a pretty big deal at the time (December 1999). It was, and still is, one of the features that the "free" version of WindowBlinds stand alone doesn't support. 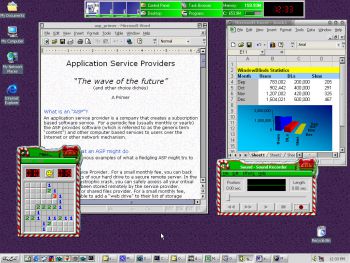 By early 2000, Stardock was in the position of where Object Desktop did the "main" things that the OS/2 version did. Windows itself had evolved over the years to make some of Object Desktop's features from OS/2 redundant or simply weren't applicable. So it was time to start putting together the "new" stuff. The stuff that wasn't on the OS/2 version at all.

That meant that it was time for DesktopX. The concept from 1997 in which the long talked about Microsoft "Cairo" and IBM/Apple Taligent ideas would come together. And the release of Windows 2000 opened the door to the component that could make use of the new visual APIs to create WindowFX... 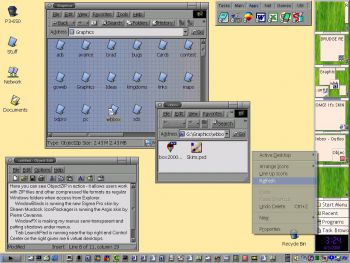 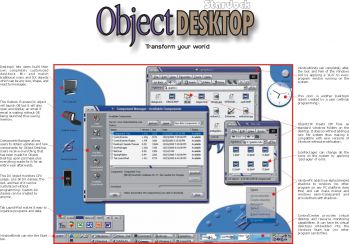 In March of 2001, Microsoft had discussed "Luna" the code-name of the "Windows XP look". Stardock's Alexandrie created "PreLuna" which was our concept of what Luna might look like.

Another reason why Windows XP helped things is that it and ObjectBar arrived at nearly the same time. As previously mentioned, ObjectBar can modify or create its own Start bars. Nothing made creating your own Start bars as exciting as Windows XP did. 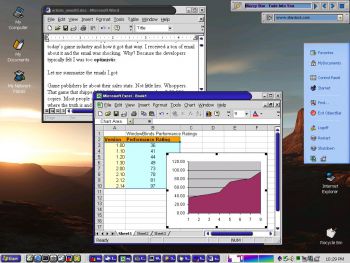 ObjectBar (which is what is doing that Start bar on the bottom) came out right when people wanted to make their own Start bars. Mainly it was non-XP users wanting to make their Start bars look and function like Windows XP.

By this point, things had also become a bit convoluted. So you wanted to have a "Whistler" desktop? Well, just load up WindowBlinds and change the skin to the Luna one. Then load up IconPackager and apply the icon set. Then set up ObjectBar to load the Start bar and get DesktopX to provide the nice alpha blended icons on the desktop and then change your wallpaper to a nice Luna one and so forth.

In short, Object Desktop was finding its way into only two markets: Tech savvy consumers who were willing to tolerate having to tweak a half dozen programs to get what they wanted. Or by corporations who used it to create a unique environment that never changed after it was set up.

This is where the idea of Convergence came from. Now called "WinStyles" on its own, Convergence was about applying all the parts together as a single entity. You would apply a "Whistler Suite" and WinStyles (Convergence) would then talk to the various sub programs seamlessly. You, the user, would never have to deal with the individual programs.

WinStyles, aka Convergence, opened the door for users to create unified desktop looks. You could create a "Suite" of skins and themes which when applied would take care of everything at once.

Rather than trying to compete with Microsoft on its own turf, Stardock worked with Microsoft and became a certified Microsoft development partner. This would become significant later on.

Object Desktop's goal has never been about "Eye candy". Even though eye candy is what many people use Object Desktop for, the real purpose is much bigger than that -- to let people decide how they want their computers to work. How something looks is part of that. But how it functions is equally important.

As a result, Object Desktop's integration in Windows became increasingly seamless. Users could build their own environments. Mix and match things from other operating systems to make Windows their idealized work (or play) environment.

The features of Object Desktop, when matched with the robustness and features of Windows XP could literally be made into anything anyone wanted. DesktopX users, for instance, could write a simple JavaScript to find out what the weather was and put it right on their desktop. Or right click on it and package it up to share with others.

But it was in 2002 that Object Desktop really became mature enough to be used by large corporations. One of the first companies to license Object Desktop was Microsoft who has used it to deliver customize Windows environments for their customers.

Microsoft's Xbox visual style allowed users of all versions of Windows to have an Xbox style to their whole desktop. Microsoft also used it for Age of Mythology and the new Rise of Nations strategy games.

Movie studios and TV shows had long used Object Desktop or parts of it to create those "futuristic" computer screens. In 2002 Stardock, Dell, and Touchstone Pictures teamed up on "The Recruit". 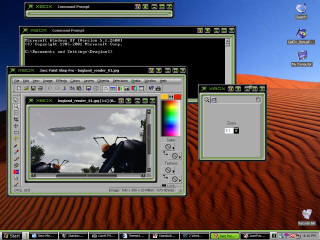 In the far off distance there is Longhorn. The code-name to the next version of Windows. And it will have features that will both challenge and excite the developers of Object Desktop. It has a new compositing engine that provides great power but will probably require great effort to fully utilize. It has a new file system for information management, and so forth.

But that's still a long way off and the good news is that Windows XP has lots of promise in it already and has much to exploit. But part of Stardock's on-going challenge has been to figure out how much money to spend on development and testing of components for older versions of Windows. For example, WindowBlinds 4 was released for Windows XP only. The version for Windows 98, ME, and 2000 had to wait because much of the enhancements in WindowBlinds 4 were because of features native to Windows XP. As a result, those OS features have to be created from scratch on previous versions of Windows. As time goes on, such efforts will be an increasing challenge.

When looking back at 1999's debut of Object Desktop on Windows, it's just amazing. 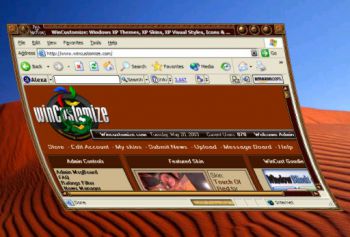 Another big overhaul has been the replacement of Component Manager with Stardock Central. 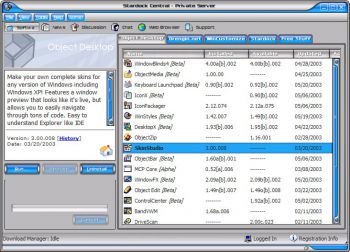 Stardock released Object Desktop 2007. This was the annual snapshot of the major components of Object Desktop put together as a single package. This year is a turning-point in desktop enhancement technology because next year, the cutting edge will be on Windows Vista. Object Desktop 2007 was timed so that Windows XP users could get the programs at their prime while also gaining access to the new Windows Vista content. 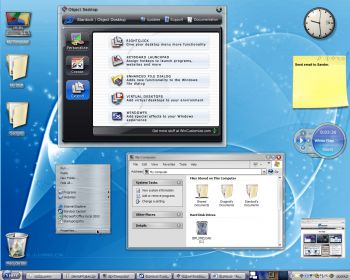 Historically, there has just been Object Desktop. But over the years, the number of programs and features in Object Desktop grew to the point of being intimidating to new users. This year, Stardock took the path of creating two versions of Object Desktop:

Object Desktop provides the core components of the suite to allow users completely customize the desktop experience. It does not include the various editors and utilities that Object Desktop Ultimate includes.

The 2009 edition of its popular desktop experience suite Object Desktop was released.

It includes 6 utilities that focus on enhancing a particular aspect of Windows. These are:

Object Desktop 2010 also includes nearly a dozen other programs that are available through the included download manager, Impulse. 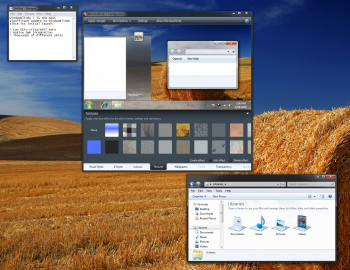 In 2012, Object Desktop has again begun returning to its roots of providing important but often subtle improvements. Let’s look at the above screenshot:

Object Desktop was updated in 2016 and now has 14 different applications. 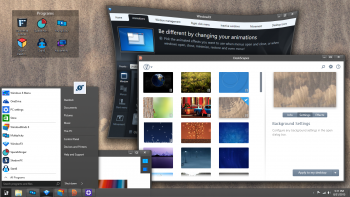 Neither customizes the desktop but rather focuses on what we are calling the Metadesktop. Multiplicity lets you easily access your other desktops on other machines and SpaceMonger lets you manage your drive space on your desktop and cloud drives. 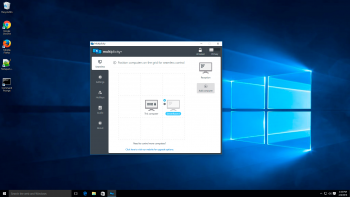 Object Desktop is updated regularly, and the 2018 snapshot now includes the new app Groupy. Groupy allows you to drag and drop applications together into a common tabbed interface, organize multiple apps and documents for convenient access, and group tabs together for optimal workflow. 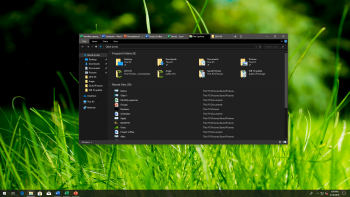 Object Dekstop in 2019 brought some major updates and new apps to the suite of desktop applications. DeskScapes 10 was added which brings animated wallpapers to Windows 10. We have a brand new Object Desktop Manager available which makes downloading and updating your Object Desktop apps even easier. 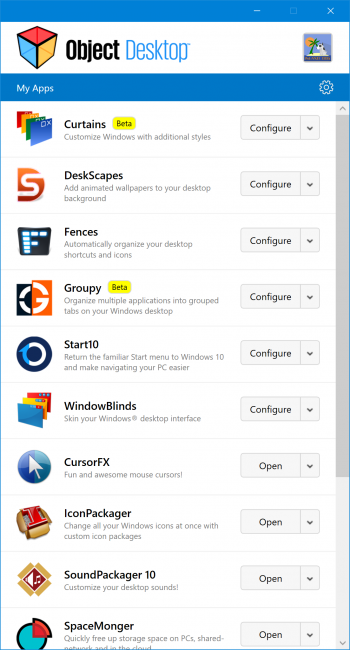 Curtains is a new app that allows you to customize Windows 10 with tons of additional styles. The Curtains beta is available to Object Desktop members and will be fully available once released. 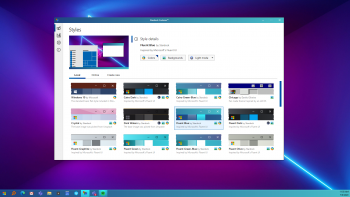